The following challenges are not fully developed in the current version of eTransport, and should be pursued in new projects.

Stochastic programming is a framework for modeling optimization problems that involve uncertainty. While deterministic optimization problems assume all parameters are known, most real problems include some unknown parameters. In stochastic programming we can use known or estimated probability distributions to express possible parameter values. The objective is to find a strategy that minimizes the expected cost of the decisions subject to the uncertainty one faces.

The first step towards the stochastic analysis of our system is setting up a so called scenario tree where possible scenarios are organized in a tree-like structure for better overview. The levels of the tree are defined by the various investment periods defined by the user. For every investment period we can set up a group of possible scenarios. If a certain scenario has a connecting line to another scenario, it means that the second scenario is a possible continuation ("child") of the first scenario ("parent"). It is possible to design an asymmetrical tree if this represents reality best, but the probabilities of scenarios that have the same parent have to add up to exactly 1 (which is not the case in the illustration below). 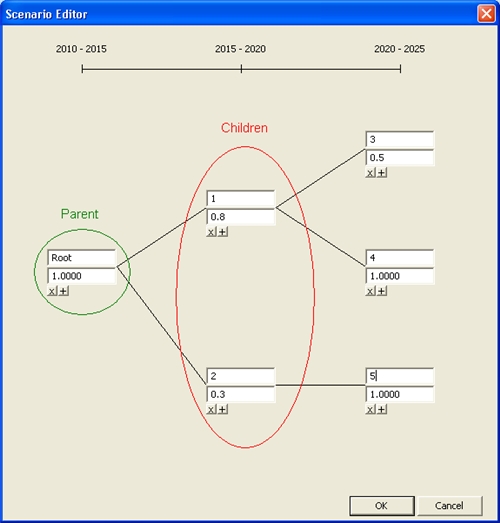 After having built the scenario tree, stochastic data have to be filled in for every season defined in the system and for every attribute of the component. A certain set of stochastic data belongs to a combination of a component, an attribute and a season. For example, if we have two seasons defined, say, winter and summer, and we are editing a component with two attributes cost and maximum outlet, we can define 4 data sets: Two for how the cost behaves in each of the seasons (costs might be slightly higher in winter for example), and another two for the maximum outlet in winter or summer. However, the user can also choose not to define data for one or more seasons or attributes. If there is no stochastic data defined for a certain component or a certain season, the analysis will fall back on the deterministic data.

After having run the stochastic analysis, the results are shown in the “Stochastic Analysis” tab in eTransport’s result section. Two values are displayed: The total cost (x-axis) and the standard deviation of the cost (y-axis). The higher the standard deviation is, the higher is the probability of deviating from the expected cost. This might be a critical factor for not choosing an investment with minimum cost but instead going for one with a higher cost but a lower standard deviation.

The stochastic optimization module is currently not well tested and is not included in the standard version of eTransport. An alternative version with the stochastic module included can be obtained on request.

Preliminary work was performed in the area of LCA in a Master thesis and a project report. Various LCA metrics were evaluated, and three were identified as most appropriate for local energy planning :

A simple test implementation was made in eTransport to study how these three parameters changed depending on which energy mix was assumed in the analysis. In this way, different energy sources can be weighted with different consequences also outside the area of analysis. This implementation has not been further developed so far.