The novel approach to pressure prediction is combining interpretation of seismic data with basin modeling techniques in order to properly assess the relevant mechanisms contributing to overpressure build-up. 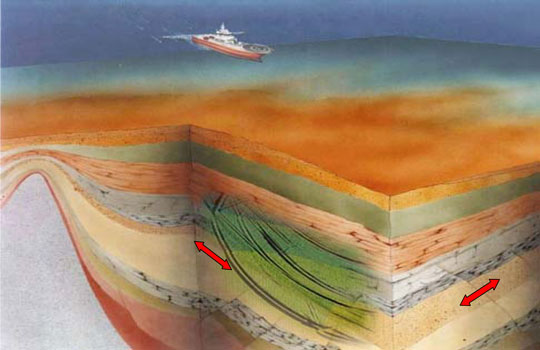 One important element in the interpretation of seismic data is velocity-depth trends for shales. Models for the dependence of velocity with burial depth, mechanical compaction and diagenesis will be developed. Mechanical compaction is dependent on the clay content of the sediments. Smectite illitization depends on the temperature history that the sediment has experienced, as well as the mineral content of the shales. The shale properties will be integrated with recently published rock physics models of Smectitic and Illitic shales.

The main deliverable will be a software model for prediction of pore pressures using seismic velocity data as input. Additional deliverables are models for velocity-depth trends in shales. Other applications of velocity-depth trend models include seismic processing, velocity estimation from seismic, AVO-analysis, and estimates of erosion magnitudes.

The main elements of the data and work flow intended in this project is illustrated in the figure below. On the left side of the flow diagram, Pressim takes interpreted seismic horizons as input for building a lithology model. This serves as a basis for modeling sediment compaction and diagenesis, which then is used to model 3D fluid flow and pressure development through time. Measured pore pressures in wells are used to calibrate the Pressim model. 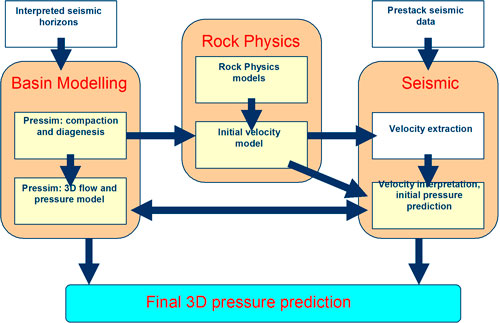 The Pressim compaction and diagenesis models will be combined with relevant rock physics models to predict local velocity-depth trends for normally-pressured sediments. Log-data from wells will be used to calibrate the velocity-depth models.

On the right side of the diagram, either Optaprox or Stereotomography will take the prestack seismic data as input to estimate velocity from reflection travel-times. The obtained velocity cube will be interpreted using the predicted normal velocity-depth trends to come up with an initial prediction of present day pore pressures. This initial prediction will be coupled with the Pressim fluid flow model to produce a final pore pressure prediction away from well-control both through geologic time and at present day.

The project was sponsored by Statoil ASA, Total Norge E&P AS, BG Norge Ltd and Det norske oljeselskap, in addition to the Norwegian Research Concil.

SINTEF Petroleum Research has accomplished a petroleum systems modeling study that focus on the evaluation and uncertainity analysis of selected Mesozoic play types in the  western Barents Sea.

SINTEF Petroleum Research, AGR Petroleum Services, Fugro Geolab Nor and Geotrack International have completed a new regional integrated petroleum systems study that covers a large part of the Norwegian Sea (approx. 62° to 68° N). The study identifies key risk factors for exploration in the area by combining a comprehensive database with novel modelling techniques.

SINTEF Petroleum Research, in cooperation with AGR and Geotrack, has completed work on the upgrade of the basin modelling part of the IBS 2005.