The fluid pressure distribution in a carrier or reservoir rock can influence the secondary migration of petroleum in a sedimentary basin. Good estimates of present fluid pressure in yet undrilled prospects are highly relevant for planning safe well layouts and drilling procedures.

Modelling of the fluid pressure distribution over geological periods of time and up to present day can therefore contribute to reduce explorational and technical risks.

Fluid pressure in carrier rocks is generated within pressure cells which are typically bounded by (wholly or partly sealing) faults and low-permeable cap rocks.

Within these cells, pressure can be generated by compaction and chemical diagenesis. It can be dissipated by lateral flow across faults and by vertical leakage through the caprock.

The Pressim module defines the reservoir units into pressure compartments and perform pressure generation within and dissipation between the pressure compartments. The 3D flow pattern on a geological time scale and the resulting pressure distribution are modelled. It is thus possible to achieve a best calibrated case out of a large number of simulations that may form a basis for uncertainty and sensitivity analyses.

Pressim has been successfully applied to numerous case studies on different types of basins. Pressim pressure simulation tools may be integrated to the most common basin modelling tools.

The calibrated flow models from basin modelling studies have shown that the pressure within the reservoir units is a dynamic phenomenon on a geological time scale. If the pressure difference across the lateral barriers is increased (i.e. due to pressure depletion from production) the pressure may even behave dynamically on a production time scale. Pressure communication between adjacent fields in production have been observed all over the world in different types of sedimentary basins.

It is possible to model the pressure communication within a petroleum province using the Pressim tool. The calibrated flow across the boundary can be adopted from a basin modelling pressure study. This technique offers several applications:

Pressim includes all processes relevant to pressure generation and dissipation. Unique features are related to 3D flow capabilities making it possible to predict the pressure in time and space. Resulting pressure distribution is modelled and a large number of simulations may form a basis for uncertainty and sensitivity analysis. 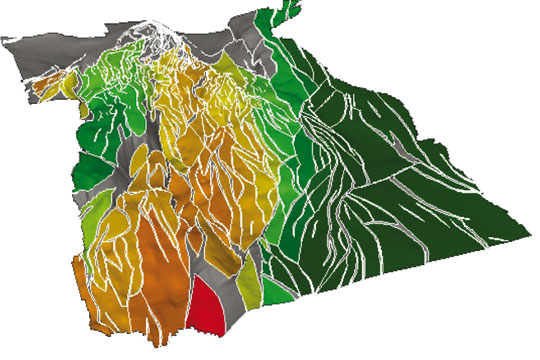 Pressure generation and dissipation are calculated for the pressure compartments of a single-layer reservoir unit. A pressure (and stress) compartment is bounded horizontally by the fault pattern at the top of the reservoir formation, and vertically by the low-permeable rocks.

Pressure generation and dissipation are modelled by quantifying the following geological processes: 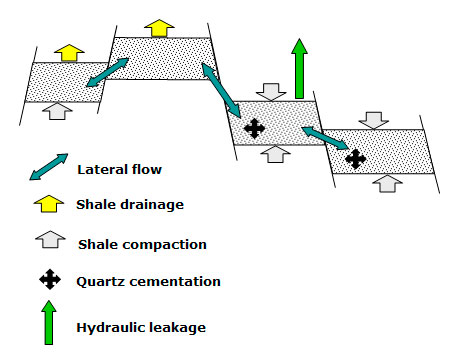 The burial and compaction histories are derived from depth-converted maps of the overlying sediments.

The established model uses fluid mechanical properties of the pore water to estimate the pressure distribution as a function of time.

Lateral fluid flow is modelled using a transmissibility algorithm defined by the dip-slip displacement and burial depths of the faults. Hence, the geo-mechanical properties for the caprock vary through time as a function of subsidence.

The numerical solution employs the “Forward Euler” technique, which is stabilized by using minimum volume during dissipation.

Pressure and stress results are reported for a series of time steps, which are correlated to the depositional ages of the stratigraphic horizons.

Lateral flow across a fault

Controlling factors for lateral flow are the throw of the fault and the thickness of the carrier.

If the reservoir units overlap (top left), the fault zone leaks, otherwise the fault will be nearly sealing (bottom right).

The rupture of the cap rock and subsequent is defined as the point when the Mohr circle crosses the Griffith-Coulomb failure envelope. From this point on, the simulator shifts to the frictional sliding criterion, this implies loss of cohesion in the cap rock casing a vertical fluid leakage from the pressure compartment. The empirical model for minimum horizontal stress presented by Grauls (1996), modelled overpressure and the geomechanical properties are used to model Mohr-Coulomb circle.

Reference:
Grauls, D. 1996. Minimum Principal Stress as a Control of Overpressures in Sedimentary Basins. In: Proceeding of the 8th Conference on Exploration and Production. IFP Report No43313, Institute Français du Pétrole, Rueil-Malmaison. 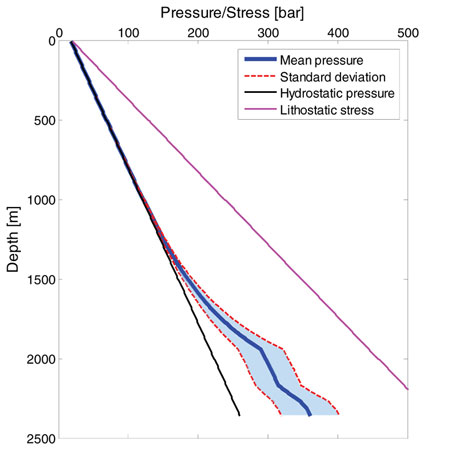 The Pressim MOCA approach starts with an established pressure model for the area. This model contains pressure maps for a series of reservoir units. For each simulation run, important input parameters are selected randomly and usually independently. The more variables one adjusts, the more simulations may have to be run to build reliable probability distributions from the simulation results. There is, in principle, no maximum limit to the number of parameters that can be varied in such a procedure.
For each pressure simulation run, results for all reservoirs (calibration fields and prospects) are stored. After storing the results, the iterative procedure is repeated until enough simulations have been run.

Besides many case studies for our customers resulting in a variety of internal reports, the Pressim software has been used in several scientific projects based on which the following articles and two PhD's were published so far:

Borge, H. 2002: Modelling generation and dissipation of overpressure in sedimentary basins: an example from the Halten Terrace, offshore Norway. Marine and Petroleum Geology 19, 377-388.

Additionally, many results of studies with the Pressim software have been presented at international conferences:

Do not hesitate to contact us for reprints or additional information on the software and our consultancy work.

The SEMI GeoBase is automatically used to build the geomodel used in Pressim. The input data needed for a Pressim study is: 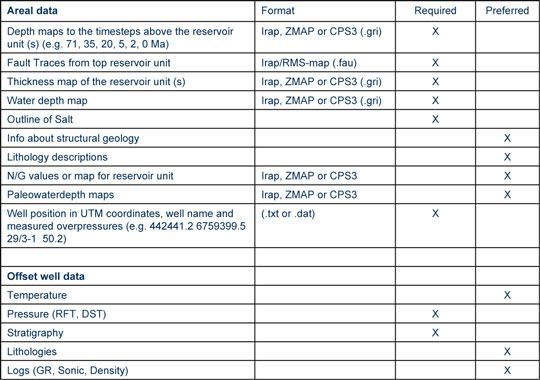 Case studies
SINTEF has a record of more than 10 years in performing basin modelling case studies for exploration divisions of oil companies. Our services include (but not limited to): 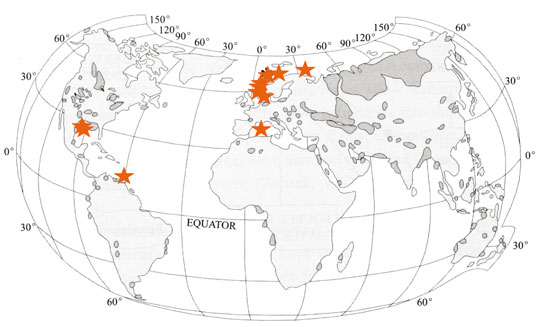 Thereby, we gathered experience from many different area of the world:

The fluid pressure distribution in a carrier or reservoir rock can influence the secondary migration of petroleum in a sedimentary basin. Good estimates of present fluid pressure in yet undrilled prospects are highly relevant for planning safe well layouts and drilling procedures.

The fluid pressure distribution in a carrier or reservoir rock can influence the secondary migration of petroleum in a sedimentary basin. Good estimates of present fluid pressure in yet undrilled prospects are highly relevant for planning safe well layouts and drilling procedures. Modelling of the fluid pressure distribution over geological periods of time and up to Recent can therefore contribute to reduce explorational and technical risks. Fluid pressure in carrier rocks is generated within pressure cells which are typically bounded by (wholly or partly sealing) faults and low-permeable cap rocks. Within these cells, pressure can be generated by compaction and chemical diagenesis. It can be dissipated by lateral flow across faults and by vertical leakage through the caprock. Work on pressure modelling at SINTEF Petroleum Research was initiated by Øyvind Sylta who developed a concept for calculation of transmissibilities across faults. The development of the PRESSIM software started in 1996, as a part of the research project Secondary Migration in Faults and Fractures (SMIFF).

Modelling of hydrocarbon generation as a function of thermal history relies on the knowledge of the reaction network and kinetic parameters involved. We obtain kinetic models of hydrocarbon generation and cracking for individual compositional ranges for use in basin modelling programs. The kinetic models are generated for four compound classes. i.e. C1 (methane, dry gas), C2 to C5 (wet gas), C6 to C14 (light oil) and C15 to C35 (heavy oil) using the tool Kinetics05®. For various source rocks from the Norwegian shelf these data are then compiled in KinLib data sheets. However, multi-component kinetics can also be generated on a proprietary basis.

The Norwegian Petroleum Directorate (NPD) is taking over a collection of 6.6 kilometres of shallow rock cores from the Norwegian continental shelf from SINTEF.

Uplift and extensive glaciations during the late Pliocene-Pleistocene led to large volumes of sediments being eroded from continental shelf areas and deposited on the continental slopes (Laberg et al. 2010).

A new development phase for OF-Mod (Organic Facies Model) software that simulates the deposition and burial of organic carbon in marine environment in 3D.