OF-Mod simulates the deposition and preservation of organic carbon on a basin scale. It can be applied to both modern and ancient siliciclastic marine environments.

Why model organic facies?
Modelling can provide a quantitative spatial and temporal distribution of organic matter in deposits where no measurements exist. By testing different conceptual input scenarios, a range of possible organic matter distributions can be simulated. Such testing further allows the identification of the most important geological and oceanographic parameters in the modelling area, and thus results in an improved understanding of the complex system under consideration.

Modelling concept
The OF-Mod concept is based on the idea that the organic matter type, the preservation conditions during deposition and burial, and inorganic basin fill aspects are the most important factors influencing the temporal and spatial organic facies distribution in marine environments. All these model components are described using empirical equations. This mathematically simple approach means that the modelling is computationally inexpensive, and many simulations can be run in a short time. 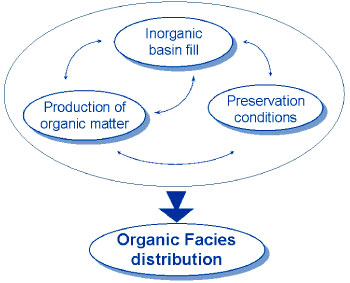 In OF-Mod, primary productivity of marine organic matter (PP) is defined as a function of the distance from shore: PP is higher close to the coast, where enhanced nutrient supply form the hinterland occurs, than in distal basin positions. Additionally, areas of higher productivity can be defined to represent e.g. river input or upwelling scenarios. 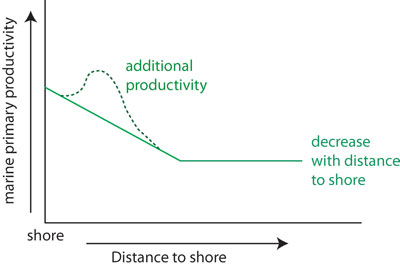 Several authors have estimated the carbon flux to the sea floor by correlating the primary produced organic matter (PP in gCm-2a-1) to water depth. This approach is also applied in OF-Mod when oxic water conditions are assumed. 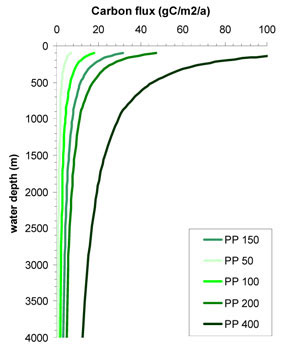 In OF-Mod the terrigenous organic matter fraction is modelled as being dispersed dependent on the inorganic grain size distribution (Bergamaschi et al., 1997; Keil et al., 1998). The particulate land plant debris is coupled to the coarse grain size fractions (sand) as both are more common in near shore areas. Heavily degraded and/or residual allochthonous organic matter is associated with the fine grain size fractions (shale).

The particulate organic carbon fraction is modelled as a function of the sand content of the sediments.

Oxygen conditions in the water column and near the sea floor affect the preservation of organic matter after burial, especially the more labile marine fraction.

In this cross-section the basin to the right was defined to have an anoxic water column. This can result in improved preservation of the organic matter in the sediments.

Parameters used in determining the inorganic basin fill model, and the organic parameters can be saved as output.

All parameters used in determining the inorganic basin fill model (sand fraction, sedimentation rate,...), as well as the organic parameters (TOC, individual matter fractions,...) can be saved as output.  In addition, derived parameters such as Hydrogen Index (HI), δ13C and source rock potential (poor, fair, good, or very good), can be exported. 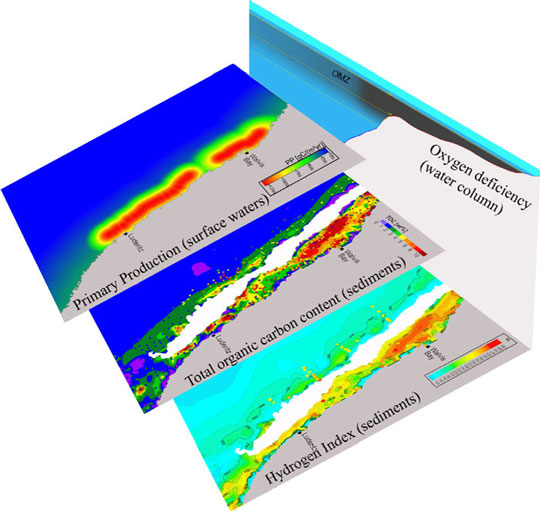 TOC and HI values can be compared with measured values from cores, and can thus be used to calibrate the model.
OF-Mod representation of the modern high-productive Benguela upwelling area offshore south-western Africa. 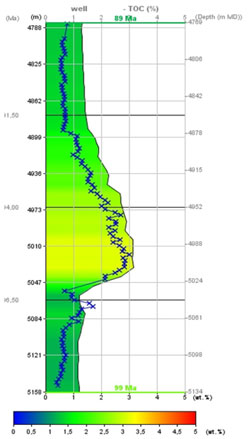 Comparison of modelled TOC values (colours) with measured TOC values.  The slight overestimate of the modelled results is due to the maturity of the measured values, which causes a decrease of the present-day values with respect to the values at the time of deposition.

The results can be exported as 3D grid data (GRDECL-format), but can also be displayed and exported as maps (ZMap+, Irap ASCII classic, xyz-format).  Using these formats, the results can be imported easily in another basin simulator such as SEMI, for HC charge or entire petroleum systems modelling.

The following peer-reviewed papers have been published so far, describing or using OF-Mod.

Additionally, many results of studies with the OF-Mod software have been presented at international conferences.

Input for the inorganic basin fill modelling consists of:

Information from wells or from sea-floor measurements can be used for calibration and/or for developing scenarios for the organic model part: 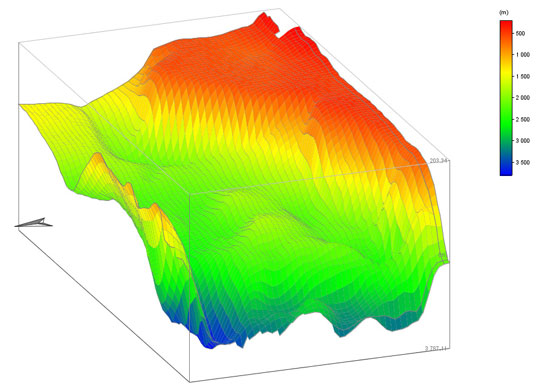 Knowledge of the inorganic basin fill and basin configuration is important for organic sedimentation modelling. 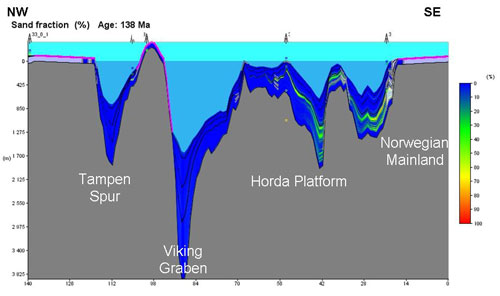 Cross section showing the modelled sand fraction in the Heather and Draupne formations in the Norwegian North Sea.

OF-Mod 3D has been applied in both research studies and in consultancy case studies for industry in different parts of the world.

Research studies, alone or in collaboration with academia, aim to use modelling to understand the influences on organic carbon deposition.  This knowledge is then used in developing methodology that can be implemented in OF-Mod 3D to simulate organic carbon deposition and burial, based both on local knowledge (from e.g. wells) and on process knowledge (such as the influence of sea level on the input variables used in the model).

Source rock distribution predictions have been made with OF-Mod 3D for several areas.  Such predictions are for example part of the Basin Modelling integrated studies for the Barents Sea and the Norwegian Shelf.  In these studies the OF-Mod 3D results were used as input for the generation, expulsion and migration modelling in SEMI. See the literature list for published results of some other studies.  See the following posters for examples presented at conferences:

If you would like us to perform a case study for you, please get in touch with Ansattinfo mangler. 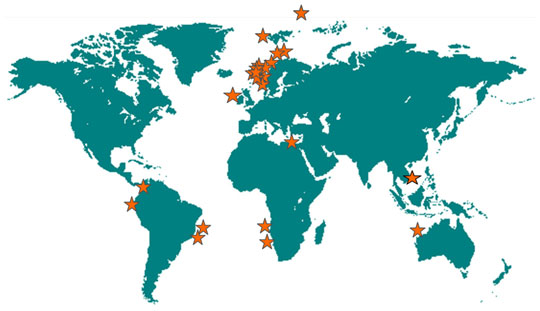 A new development phase for OF-Mod has now started. OF-Mod (Organic Facies Model) simulates the deposition and burial of organic carbon in the marine environment in 3D. The simulation results can be used to predict the spatial and temporal occurrence of source rocks.

A new development phase for OF-Mod (Organic Facies Model) software that simulates the deposition and burial of organic carbon in marine environment in 3D.

The Norwegian Petroleum Directorate (NPD) is taking over a collection of 6.6 kilometres of shallow rock cores from the Norwegian continental shelf from SINTEF.

Uplift and extensive glaciations during the late Pliocene-Pleistocene led to large volumes of sediments being eroded from continental shelf areas and deposited on the continental slopes (Laberg et al. 2010).

Modelling of hydrocarbon generation as a function of thermal history relies on the knowledge of the reaction network and kinetic parameters involved. We obtain kinetic models of hydrocarbon generation and cracking for individual compositional ranges for use in basin modelling programs. The kinetic models are generated for four compound classes. i.e. C1 (methane, dry gas), C2 to C5 (wet gas), C6 to C14 (light oil) and C15 to C35 (heavy oil) using the tool Kinetics05®. For various source rocks from the Norwegian shelf these data are then compiled in KinLib data sheets. However, multi-component kinetics can also be generated on a proprietary basis.