The need for office space in hospitals is increasing, and the modernisation project of Nordland Hospital has decided to implement a concept phase for the construction of an office wing for clinical office functions, in addition to its other development and reconstruction of the hospital. There is also a need to look at opportunities to use the building as a relief for the rest of the building project when it comes to building and running hospitals in the same place. The assessment carried out in accordance with the supervisor for the Competence Network for hospital planning.

The modernisation of Nordland Hospital in Bodø consists of both the remodeling of existing buildings and new construction. The basis for modernisation was laid in 2006, and in the meantime, the organisation changed and new functions and positions have emerged. There are currently a total of 755 office spaces in the hospital. A new office wing will cover an increased need of more than 200 office spaces in addition to what has already been planned. In addition, there is a need to establish new areas of pharmacy and for a data center.

The project is funded by the health authorities.

SINTEF is the project manager and has developed a functional program, described future office functions, retail and supply chain are the basis for solutions. Developments in hospitals with short turnaround times for patients, interdisciplinary collaboration, telemedicine, need for knowledge transfer to local authorities and decentralised specialist health care, as well as the need to recruit and retain competent professionals have implications for how future office jobs in hospitals should be. Along with Ratio Architects and the project management from Nordlandssykehuset we arrived at alternative solutions and presented a proposal for a decision of the Board of Nordland Hospital in December 2013. 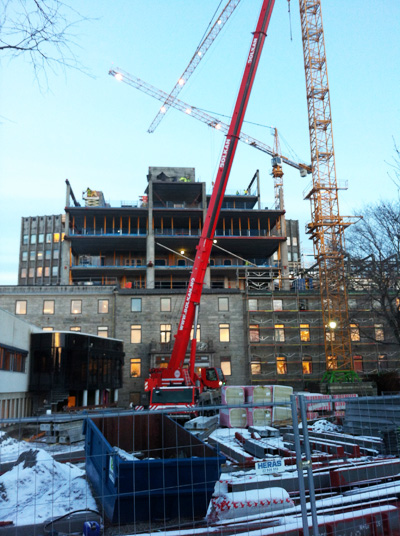 There is a need for better facilities for today's psychiatric unit at Sørlandet hospital (SSHF) in Kristiansand, Norway. Today it is old and inconvenient in terms of quality and operation. SSHF has decided to implement a concept phase to examine the possibilities for development of a new psychiatric unit. There are day calls for adult psychiatry in Kristiansand and Arendal, and four additional community mental health centres (DPS). The study is funded by the health authority and implemented in accordance with the Competence network for hospital planning's supervisor for early planning. It is implemented parallel work on development of the whole health authority, as this concept phase will be included.

Quality Assurance of the Building Process at Sunnaas Rehabilitation Hospital

Sunnaas Rehabilitation Hospital is in need of renovation of their buildings, including a new wing. SINTEF has been involved in establishing the master plan for the hospital which is followed when a new wing will be built according to the available investment funds.

Herlev Hospital in Denmark has, after the hospital reform, had a larger catchment area than earlier, and there is a need to increase the capacity of the hospital. The planned new buildings for emergency services as well as a woman/child center in addition to the other buildings. SINTEF was commissioned to analyse patient care in emergency and operating rooms, and look at how to best facilitate efficient patient flow and effective work processes in the new hospital.

We will evaluate the restructuring process which began when the South-Eastern Norway Regional Health Authority was established. The aim is to use the knowledge established through this evaluation as a source of learning and improvement in the health region.

When hospitals group patient rooms into small clusters, nurses have more time for their patients. But the design of these ‘bed clusters’ is important.