How can we protect nature and act on climate change? In the wake of heated debate in Norway over windpower development, energy researchers from Norway's largest university and Scandinavia's largest independent research institute offer politicians some thoughts.

NTNU and SINTEF play an important role in the Norwegian public debate. They are tasked with contributing and sharing knowledge so that it can be put to use and contribute to the greater good of society. This is why we have gathered our collective knowledge from the breadth of our professional environments, so that we can put wind power development into a sustainability perspective. Johan Hustad (left), director of NTNU Energy, and John Olav Giæver Tande, chief scientist, SINTEF, wrote this opinion piece. They highlight nature’s intrinsic value, and local co-determination as two of three important factors that need to be in place to succeed with wind power in Norway.

Norway is in the midst of transitioning to be a low-emission society. Our perspective is that as much as possible, all energy development should be in keeping with the UN’s sustainability goals. Based on these goals and on our research, we offer the following tips for sustainable development of wind power in Norway.

The use of all locations – onshore and offshore – must take sustainability into account, and nature’s intrinsic value must play a greater role in socio-economic calculations.

In May 2019, the UN expert nature panel (IPBES) came out with a report showing how humans affect nature and that we are now losing species and diversity at record speed. Human activity is threatening one million species, changes in land use being the main reason (1).

In August 2019, the UN climate panel (IPCC) published its Special Report on Climate Change and Land, which points out that climate solutions must increasingly incorporate sustainable land use practices (2). Plastics and other negative impacts likewise greatly threaten the ocean environment.

Win-win measures that are balanced and take into account both natural diversity and the need for climate action must be identified. Careful land planning and good siting of onshore and offshore wind farms can reduce negative effects and the conflicts between nature, wildlife and business interests.

Norway has the know-how to plan and develop projects that protect the environment, such as power generation that takes nature into account, and it should continue to invest in research and development to create new sustainable innovations and solutions. 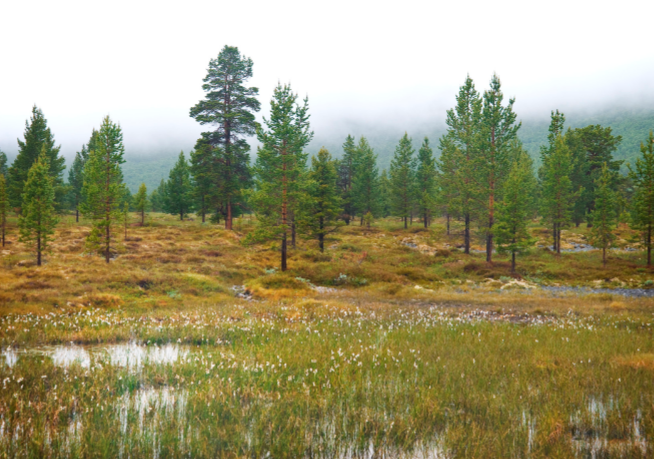 Development in habitats that contain a lot of carbon in the soil, such as marshes and wetlands, should be done with great caution. These areas typically bind up CO2 that can be released if the land is developed. Development thus can result in reduced or even negative climate gains.

Decision-making processes and impact assessments should involve and engage the broader population to a greater degree than they do now. Transitioning to a low-emission society requires effective transition strategies and a good climate policy, which encompasses much more than technological development. It also requires a major societal change. Understanding how most people relate to climate strategies and measures is an important part of addressing climate change.

Society needs a more transparent, open and comprehensive decision-making process. As wind power development occurs, the authorities and businesses should engage and involve the general population in developing, planning and assessing the impacts of wind power both on- and offshore.

Offshore wind power is an important part of a sustainable energy system for the future. In its Sustainable Development Scenario, the International Energy Agency (IEA) expects wind power to be the second largest global energy source in installed capacity by 2040, and the largest in terms of delivered energy (3). The IEA expects that onshore wind energy will continue to dominate, but with strong offshore wind development, with growth from today’s level of 16 GW to over 350 GW (1200 TWh) by 2040 (4). The technical potential for offshore wind is more than a hundred times greater than currently exists. In a study (5), NREL (USA) states that offshore wind could potentially deliver 192 800 TWh per year, which is the equivalent of eight times the world’s electricity supply in 2014.

Floating wind turbines have great potential since they can be placed in deep water areas, providing the ability to tap into enormous wind resources and to have less conflict with other interests in siting the turbines.

Developing a Norwegian domestic market will be important as a learning arena for practical testing and problem solving, as a basis for reference and for developing market expertise in this new industry. Norway’s offshore wind knowledge and technology give the country an edge in reaching new markets and driving costs down so that offshore wind is profitable. To maintain this advantage, Norwegian industry must develop even smarter and better solutions, which requires effective interplay between industry, education, research and innovation.

Norwegian industry’s strong knowledge-based and technological competitive advantage in floating wind farms is partly due to its petroleum industry and maritime expertise.

Norway’s foremost areas of expertise are with chassis, maritime operations, operation and maintenance, sea cables, and surveillance and management systems. Examples of its pioneering role in the field are the installation in 2009 of the world’s first full-scale wind turbine, Hywind, outside Karmøy municipality, and the construction and operation of the world’s first floating wind farm, Hywind Scotland, in 2017.

Our recommendation is for Norway to take advantage of this competitive advantage now.

Continued Norwegian investment in offshore wind with R&D and a development programme will help reduce the cost of floating wind power. This will lead to increased global development, more clean energy and will contribute significantly to achieving climate targets. Norwegian exports of technology and electricity will create both value and new jobs.

Norwegian businesses and industry have set a target of achieving a ten per cent market share for Norwegian companies in the global offshore wind market by 2030. This is equivalent to increasing Norwegian exports in offshore wind tenfold – from NOK 5 billion to NOK 50 billion.

This is considered realistic, but will require a commitment and ramping up by industry of both basic and applied research in the field. Norway could earn a great deal from offshore wind power development. The country is in a good position to take a role as an international innovator, with its knowledge and experience from the offshore and marine sectors, the blog authors say. Illustration: Equinor.

Testing under way for the world's first autonomous container vessel

Model tests of the world's first battery-driven, autonomous container vessel are currently under way in the Ship Model Tank at SINTEF Ocean. The vessel will be ready for launch in eighteen months time.

This week, scientists from all over the world meet in Trondheim to learn about the technology of CO2 capture.

Even greener solar power on the way

Europe wants to reduce its needs for raw materials and raise the level of recycling of resources in the solar power industry. If this project is successful, greenhouse gas emissions from solar panel manufacture will fall by 25 to 30 per cent.

Guardrails with inbuilt noise-barriers are on the way

Finding the way to lung tumours by “GPS”

The innumerable divisions of the bronchi often turn the hunt for tumours in the lungs into a game of chance. But soon, lung specialists will be able to navigate accurately inside the airways by “GPS”.

Norway should lead the way on unmanned vessels

The Norwegian Maritime Directorate is quite decided that Norway ought to be the first flag state to bring unmanned vessels to the market.