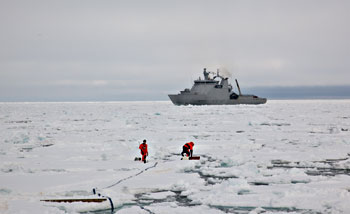 When the container ship Godafoss ran aground earlier this year, it became clear that existing Norwegian oil spill equipment cannot effectively treat large spills in the intense cold and ice. According to senior consultant Knut Arnhus at the NCA, only some of the equipment worked, but owing to low wind and small waves, NCA collected over 50 percent of the oil spill in booms.

Oil spill equipment is not good enough
SINTEF has recently completed a research project that investigated how oil spills can be treated under Arctic conditions. The conclusion was that existing equipment continues to be insufficient and that there is a need for further development. Our full-scale experiments show that burning and the use of chemical dispersants were the methods that worked best in the field. Dispersants are approved chemicals which are not very harmful to marine life and the shoreline. The liquid is sprayed directly onto the oil, which dissolves and forms smaller droplets.

One of the challenges identified by the project was to find suitable spray or dispensing equipment for ice conditions. During the project, prototype equipment for application of dispersant from a boat was developed, which appeared to work well. Another challenge is that oil treated with dispersant must be mixed into the sea. In the open ocean, waves and current can perform this job, however, stationary water and ice reduces the effectiveness of this process. In these situations, boats were used to create artificial turbulence that helped to disperse the oil into the seawater. This is a technology that has received considerable attention in recent years - also called "prop wash".

The project invited 15 suppliers of oil spill response equipment to make suggestions for new mechanical oil spill response equipment that will operate in the Arctic. According to Ivar Singsaas, research manager at Marine Environmental Technology department at SINTEF, two of the suppliers where chosen to develop oil skimmers with potential for oil recovery in ice. Both concepts proved to work well in ice, but with slightly reduced efficiency when compared to open water.

This research subject is being monitored by sensors both in and outside his body. The data will provide us with a new understanding of the physical challenges facing industrial workers in the Arctic.