Several very interesting and high-quality publications have recently been published in the MegaRoller project. We congratulate the authors having their papers accepted.

Now its final year, the MegaRoller Horizon 2020 research project will generate extensive knowledge in the area of power take-off (PTO) design and control systems, with the aim to decrease the levelised cost of energy of next generation oscillating wave surge convertor (OWSC) devices. The project will increase general knowledge of wave energy's applicability and inherent characteristics (such as grid support) in various business cases.

As the project approaches its conclusion, more research results are being published from the different research tasks within MegaRoller. We've picked out these three abstracts to show the wide variety of content and scientific direction among the published work to date.

We enourage anyone interested to take a closer look at the full papers, which are available in the MegaRoller Zenodo community. Here you'll find not only these three papers, but all the papers published so far under the MegaRoller project.

So far, very few studies have focused on the quantification of the environmental impacts of a wave energy converter. The current study presents a preliminary Life Cycle Assessment (LCA) of the MegaRoller wave energy converter, aiming to contribute to decision making regarding the least carbon- and energy-intensive design choices. The LCA encompasses all life cycle stages from “cradle-to-grave” for the wave energy converter, including the panel, foundation, PTO and mooring system, considering its deployment in Peniche, Portugal. Background data was mainly sourced from the manufacturer whereas foreground data was sourced from the Ecoinvent database (v.3.4). The resulting impact assessment of the MegaRoller is aligned with all previous studies in concluding that the main environmental impacts are due to materials use and manufacture, and mainly due to high amounts of material used, particularly steel. The scenario analysis showed that a reduction of the environmental impacts in the final design of the MegaRoller wave energy converter could potentially lie in reducing the quantity of steel by studying alternatives for its replacement. Results are generally comparable with earlier studies for ocean technologies and are very low when compared with other power generating technologies. 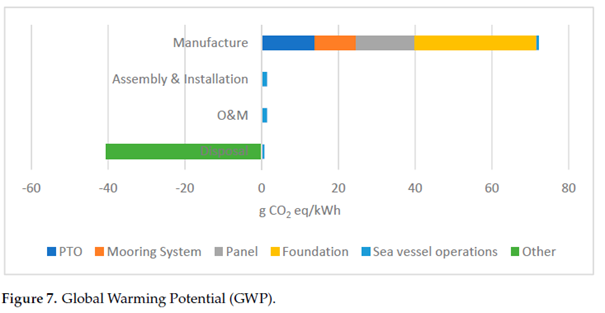 This paper describes the development of a  structural dynamics add-on to WE C-Sim, an open-source code dedicated to the dynamic analysis of Wave Energy Converters (WECs). When calculating the dynamic response of a body, WEC-Sim by default uses a rigid body dynamics approach. Such an approach ignores the potential effects of structural deformation on the WEC, which can in turn affect e.g. the distributed loads across the WEC and / or the individual (point) load sources that depend on the dynamic response of the WEC. Following a similar approach to tools used in the offshore wind industry, a structural dynamic add-on was developed using Code_Aster as the Finite Element (FE) solver to enable coupled hydro-elastic, time-domain analysis. The add-on was developed and tested using an example Oscillating Wave Surge Converter (OWSC) WEC model, currently being developed as part of the H2020 MegaRoller project. In the examples studied, the inclusion of structural dynamics is shown to affect the estimated peak Power Take-Off (PTO) loads, with variations in PTO force of over 10% being observed when structural dynamics are considered in the analysis. 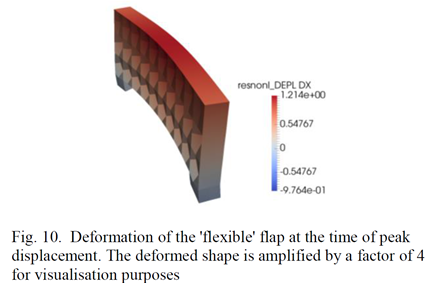 Why do humans have unique auditory event‐related fields? Evidence from computational modeling and MEG experiments

Auditory event‐related fields (ERFs) measured with magnetoencephalography (MEG) are useful for studying the neuronal underpinnings of auditory cognition in human cortex. They have a highly subject‐specific morphology, albeit certain characteristic deflections (e.g., P1m, N1m, and P2m) can be identified in most subjects. Here, we explore the reason for this subject‐specificity through a combination of MEG measurements and computational modeling of auditory cortex. We test whether ERF subject‐specificity can predominantly be explained in terms of each subject having an individual cortical gross anatomy, which modulates the MEG signal, or whether individual cortical dynamics is also at play. To our knowledge, this is the first time that tools to address this question are being presented. The effects of anatomical and dynamical variation on the MEG signal is simulated in a model describing the core‐belt‐parabelt structure of the auditory cortex, and with the dynamics based on the leaky‐integrator neuron model. The experimental and simulated ERFs are characterized in terms of the N1m amplitude, latency, and width. Also, we examine the waveform grand‐averaged across subjects, and the standard deviation of this grand average. The results show that the intersubject variability of the ERF arises out of both the anatomy and the dynamics of auditory cortex being specific to each subject. Moreover, our results suggest that the latency variation of the N1m is largely related to subject‐specific dynamics. The findings are discussed in terms of how learning, plasticity, and sound detection are reflected in the auditory ERFs. The notion of the grand‐averaged ERF is critically evaluated.