A recent IEA study shows that energy efficiency measures will have to account for more than half of the sum of all measures required globally to avoid unacceptable global warming in our century. This makes energy efficiency the most important climate issue of our time.

We believe there will be a high focus on energy effective supermarkets also in the future, and looking forward to work with these complex systems with our present, and hopefully new partners.

Energy savings in supermarkets
It is important to ensure industry involvement in “Energy efficient and sustainable supermarkets”. The objective is to develop and demonstrate novel energy efficient supermarket concepts for the future by integrating ventilation, air conditioning and commercial refrigeration.

Supermarkets have the major impact in energy power consumption compared to other buildings in commercial activities. Key numbers from Enova shows that supermarkets uses nearly twice the energy compared with an office building. In fact the electric energy amount for heat ventilation and air conditioning (HVAC), hot water and refrigeration utilities covers about 4% of the country total in USA and France and the 3% in Sweden. Thus, just a percentage in reduction represents a high improvement in terms of energy saving, but this is difficult to perform because many factors are involved, e.g. ambient and indoor air temperature, relative humidity, building envelope, store opening time, people presence and many others. Many ideas have been introduced in order to reduce the energy consumption; some of these are beneficial compared to others.

Therefore a system approach must be taken, evaluating various parameters at the same time in order to improve the energy efficiency.

Refrigeration counters use the major part of the energy (61% in 2007). Other big parts are heat, ventilation (17%) and lighting (14%). The dominating energy carrier for supermarkets is electricity. Looking at the total energy use, only heating and hot water could use other energy carriers. Refrigeration processes generate surplus heat so one obvious choice could be to exploit this heat for heating and hot water purposes. Heat recovery represents a well-known solution to reduce annual energy demand in commercial refrigeration and many supermarkets have been adopted it in the last years.

The CREATIV team has designed a fully integrated energy concept for supermarket, with a smart use of surplus heat from the refrigeration system and therefor 0 kWh for electrical heating. The system stores energy both in tanks and in the ground, and have a ventilation system specially constructed for supermarkets. The system gives free cooling (AC) by use of the energy wells, and can easily be regulated between the different heating and cooling demand depending on the winter and summer temperatures.

Design of a fully integrated energy concept for supermarkets

A compromise solution has been installed in an existing supermarket, and shows 15 % less energy use compared with average supermarkets. A new fully integrated system was implemented in a new supermarket in July 2013, with at potential of 30 % decrease of energy use. In Norway, there is more than 4000 supermarkets, and over 1 mill supermarkets in Europe. Estimating 25 % energy saving in Europe will result in 31 TWh of annual electricity savings (approx. 50 Alta-powerplants) which equates to carbon reductions of 16.2 million tons.

Component development.
CREATIV has a high activity within optimalisation of the refrigeration systems, replacing halocarbon refrigerants – significant leaks of which are emitted every year – with natural working fluids like CO2. Supermarkets have major energy consumption and contribute to relatively large direct emissions of greenhouse (GHG) through emissions of refrigerants (15-20% of the total charge).

There is a need for a natural refrigerant which allows for dependable operation in efficient refrigeration systems, which will not be forced to be retrofitted by legislation in the future. Systems applying CO2 as the only refrigerant have been developed and about 300 supermarkets exist in Europe, mainly in northern countries. However, the systems still have large potential in development with respect to energy efficiency, heat recovery and cost efficiency.

New high effective 100 kW CO2 compressor with increased overall energy efficiency of 8-10 % has been developed and tested by the CREATIV team. 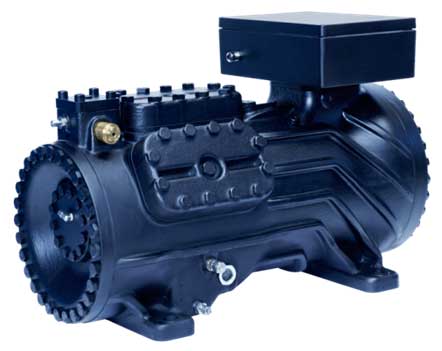 Different climate conditions (like between north and south Europe) is strongly influencing on the annual energy consumption, where the consumption is up to 30 % higher in South Europe than the Northern countries. Both air conditioning and refrigeration systems are connected with ambient temperature. The CREATIV team has developed a concept by using ejectors in the refrigeration system. Ejectors use high-pressure fluid to pump low-pressure fluid to a higher pressure section, leading to a significant reduction of energy ??us of up to 11 %?? especially suited for countries with high ambient temperatures. Experiments in a newly built test facility have shown an overall reduction of the refrigeration plant of 8 %.

Future challenges
Even though new concepts are being implemented in novel supermarkets, there are always potential to reduce the energy use and the environmental impact even more. Optimization, tools and new concepts are essential. A proposal regarding a new energy benchmarking tool for supermarkets is sent to the EU – intelligent energy program, in addition to another proposal regarding Multi-Ejector systems for even more energy effective refrigeration systems.